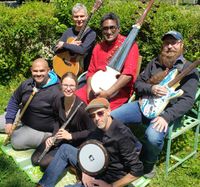 Kundalika is performing a rare cross-cultural musical conversation we call global jugalbandi. Our pieces feature compositions by Deep Shenoy that are inspired by traditional Indian ragas. They are presented in a traditional Indian classical music format called jugalbandi, in which there is a lot of space for improvisation and interaction. We have opened up our jugalbandis to musical traditions from outside India, including jazz, bluegrass, Western drums, and Latin rhythm. Our music features a large component of improvisation, so each show is a unique experience!